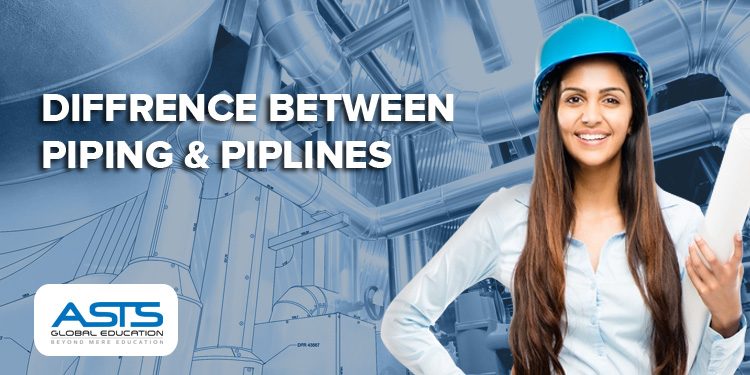 Piping is a Complex network of pipe & fittings within the defined boundaries of the plant.Whereas the pipeline is Series of straight pipe welded together over a long distance. For example, West-East Pipeline in china is 8,200 KMs longs.

The pipeline can run underground, aboveground and underwater such as a subsea pipeline. Whereas Piping is mostly above ground with very few underground services.

Another difference between Piping and Pipeline is that Pipelines are mostly large diameter that transport bulk liquid or gas from one place to other sometimes 1000s of miles in distance. Whereas Piping can be from ½” to 80” as per the plant design requirements that transfer fluid from on equipment to another within the plant boundary.

In the pipeline, use of pipe fittings is limited. Mostly long radius bends with very few other types of fittings that use at a pumping station and valve station. Whereas in the case of piping very wide range of pipe fittings are used that server different purpose within the piping system such as change the direction, size, branching, blinding etc.

Similarly, in pipeline few equipment are used within the Pipeline system such as pumps, valves & instruments that support the function of the system to transport fluid safely over a long distance. Whereas variety of equipment such as a pump, valves, filters vessel, column, heat exchanger, instruments are used within the piping system that supports the function of the plant to produce finish product.

The last difference between Piping and Pipeline,   In Oil & Gas Industries, a pipeline is designed in accordance with ASME B31.4 that is code for Liquid Transportation Systems for Hydrocarbons, Liquid Petroleum Gas, Anhydrous Ammonia, and Alcohol and ASME B31.8 that is a code for Gas Transmission and Distribution Piping Systems.

Whereas Piping is designed in accordance with ASME B31.3 that is Process Piping code and for power plant piping ASME B31.1 that is code for Power piping.